I don’t know how many people will know this term, but I have, what in my family is known as “agita” which is Portuguese for “stir” and basically means I’m agitated or all stirred up.

I had a tough time watching the debate last night for several reasons.

First, and least importantly, just looking at Biden and Ryan is off putting. If I had muted the debate and just watched the split screen of each of their faces I would have been almost as aggravated as I was with the sound on. I would have wondered what was so funny that Biden was LOLing every 10 seconds, and as for Ryan,  I see the type of look he was giving Biden on my teenagers’ faces on a regular basis and it’s the type of look that makes me want to slap it off whatever face I see it on. ( I control myself though!)

This is the look I see on my kids’ faces when they are thinking “How did someone as stupid as you ever manage to keep me alive this long?” 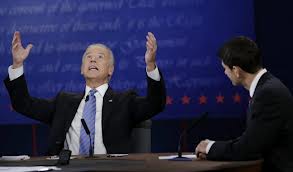 Hey Joe, can we stop the histrionics? (And BTW, you went a little too far on the tooth whitening this time.)

“The tax studies (5 or 6 depending on the debate)”

And on and on it goes….and basically any non-partisan website will tell you that the facts and figures behind these catch-phrases are, at best, a stretching of the truth and at worst, out and out lies. Both sides are doing it, and it is such a perversion of what politics should be that it makes my stomach hurt.

But the thing that makes my stomach hurt even more are the folks who are gobbling up these “facts” without questioning them at all.

My FaceBook wall is a funny place. I grew up in New England and I now live in Texas. As you can imagine I have friends all over the political spectrum. So reading the posts regarding the debate was interesting to say the least.

What’s clear to me is that if someone’s mind is already made up, regardless of which side it’s made up for, nothing the other side can say is going to be given any consideration. Meanwhile, all of the BS coming out of the mouth of the candidate that person is backing is accepted without question.

It’s time for us to be more discerning voters. You may be conservative or liberal at heart, and you may back one party for the rest of your life, but that does not mean you should endorse the way the facts about the things most important to your country are distorted. Ask yourself this. If your child came home with a story that was as far off from the reality of what happened as the stories the candidates are telling us, you’d discipline them for lying.

We need to do the same thing with the men and women who mean to lead us.

Please, I beg you, check your facts….not on a website sponsored by any party, or by NBC or FOX, go to factcheck.org or politifact.com/truth-o-meter, or any other nonpartisan website. They are out there. It will probably not change your mind about who you’d like to vote for, but at least you’d be voting on fact rather than fiction.

So, now it’s time for me to get personal. I’ve had some friends who’ve read my blog ask me publicly and privately about my characterization of myself as a “former Catholic“. It’s not a story I’ve shared too freely, even with family and friends, because of all of the emotion it stirs up.

It turns out, like many other things in my life, I take my religion in moderation too. Not a great follower of organized religion,  and not an atheist…….nope, I’m hopelessly agnostic.

I grew up in a Catholic family and as a young adult , I found a parish that kept me “in the fold” for many years. The parish priest was a cool dude. He wore sandals constantly. He spent all of his sermons talking about social justice and giving the poor a voice, in politics and society in general. Things I could really get behind.

He was one of the first, and only, whistle-blowers in the clergy sex abuse scandal in my part of the country. He didn’t seem overly concerned with birth control or homosexuality; he always said that Jesus didn’t talk about that stuff and neither would he and then he’d go right back to his social justice work. He made it possible for me to ignore the fact that I fundamentally disagreed with a lot of what my church told me I was supposed to believe. So, I stayed in my comfort zone, I rationalized away my doubts, and worse I condemned myself for having those doubts in the first place.

Then, I moved to Texas.

At first I thought that it would be easier to be Catholic here. Church is such a huge part of the culture and social life of Texans that I thought it would be a great way to get myself and my kids involved and I was looking forward to being a part of a vibrant parish. So I went out and found a huge parish, with a married priest (an Episcopalian priest who converted to Catholicism), and I thought that I had found the perfect place to continue my family’s religious traditions.

Well, not so much.

Not that it was a bad parish. From what I could see, the families are very involved in the life of the church and in volunteering and trying to live their faith. But this was not the easy breezy church I was used to. These folks take their Catechism very seriously, and I was often reminded that there are certain beliefs that go along with being a Catholic and if you don’t believe those things, you can’t really call yourself a Catholic.

Hmm. Food for thought there, but then again old habits die hard so I tried……I really, really tried to stay a part of the Church. Ultimately though, I had to be honest with myself and admit, that if I were to put a checkmark next to every Catholic or even mainstream Christian teaching I truly  believed, there would be very few checkmarks.

So I hope the words of e. e. cummings are true.

“It takes courage to grow up and become who you really are.“

I feel like they’re true, and next time I’ll touch on where my journey has taken me so far and about the reaction of my family….which as you can tell from my title, was not what I’d hoped.

My first two blog posts were about birth choice, and my next two were about politics which may seem like random subjects to start off with, but here is where I tie it all together.

As I stated before, I am passionate about women’s health. An acquaintance of mine asked me about work a couple of weeks ago and as I was telling her about my weekend on call she interrupted me and said, “You know, you light up when you talk about your job.” I can’t think of a better compliment; yes, I LOVE what I do.

And so, we come to the issue that has been sticking in my craw, the recent attempts to legislate women’s healthcare, specifically reproductive choice and the relationship between women and their healthcare providers. I don’t think any picture sums it up better than the cover of the April Issue of The Texas Observer.

Of course,  Texas is not the only place where this is happening. State by state, legislatures are taking it upon themselves to pass laws stripping women’s rights of autonomy in making certain healthcare decisions, interfering with doctor/client privacy and, in the case of Arizona, trying to force women who take birth control pills to prove to their employer that they are taking it for reasons other than birth control if they want it covered by insurance. Because that’s what we all want to do, march into our boss’s office and talk about our sex lives (or lack thereof), our bad acne, our heavy irregular periods, or our polycystic ovarian disease.  (As it stands, the Arizona law only applies to religious non-profits. Thankfully, the bill that would have expanded that exemption to all employers was voted down last week, probably due to the public pressure generated by social media.) 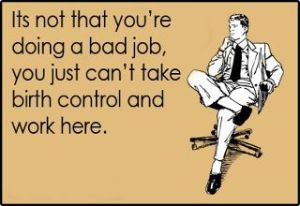 The commentary I have seen in the news surrounding these laws is absolutely disrespectful of women, comparing them to farm animals (Georgia State Representative Terry England), dismissing the invasiveness of a vaginal probe ultrasound  (A Virginia Lawmaker who said that a woman had already consented to vaginal penetration by having sex so a vaginal probe shouldn’t be a big deal.), and probably my favorite comment, that in the good old days, all a woman needed for birth control was to hold an aspirin between her knees. (Foster Friess, a Rick Santorum supporter). Wow. What year is this again?

So hell yes, I’m uppity. I’m not  a primary healthcare provider yet, but as an aspiring one, I feel a protectiveness towards all women who have to make decisions about abortion and birth control for reasons I may not even begin to comprehend. It’s not my place to judge anyone else’s decisions; I get to make decisions for myself and that’s it. Can I offer an opinion? Sure, if asked. Can I offer support and information? Absolutely. Can I walk in someone else’s shoes? No, not really, so I don’t get to tell them how to live their reproductive lives. And neither do you. And neither should the government.

I have the nerve to believe that women have the same rights of medical autonomy as men, and that together with their healthcare providers they are capable of understanding the risks and benefits of any intervention without some politician’s input. I have the nerve to believe that the men and women who are degreed and licensed to be healthcare providers know a hell of a lot more than legislators do about what constitutes medical need and informed consent. And I have the nerve to be outraged at anyone who makes access to legal interventions in healthcare harder on women. But then again, I also have a sneaking suspicion that there are lots and lots of people out there who feel the same way I do. Their voices have already made a difference in Arizona, Virginia and Oklahoma, and for that I am profoundly grateful. 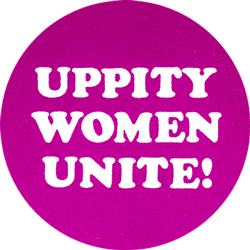